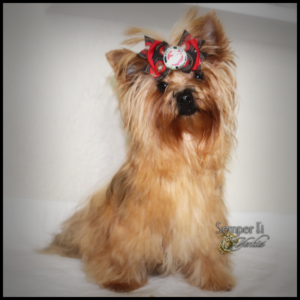 Semper Fi’s Golden Girl aka GiGi (named after Bea Arthur, who served) is a sable Yorkshire Terrier that carries chocolate and could carry parti (her dam carries SW parti, which does not show, her sire carries parti) as well as blonde. She was bred her at Semper Fi along with her sister Cami. She has an adorable teddy bear face, tiny, pert ears and is the most loving girl. Her coat is thick and straight and already touches the floor. She has such an expressive face and an adorable personality. I am so excited about this girl that there are no words to describe just how pretty of a Yorkie she is.

When you feel lousy, puppy therapy is indicated.  ~Sara Paretsky